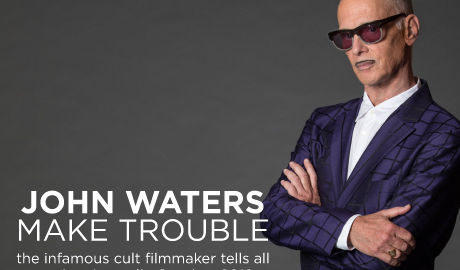 From Pink Flamingos to Hairspray, Cry Baby to The Simpsons - John Waters is the genre-defying, auteur of filth that is still out to achieve a single and absolute goal - to make some God-damn trouble.  Don't miss this outrageous pop culture luminary in this living memoir that's guaranteed to get down and dirty in the name of fame.

The king of camp, the titan of trash, the auteur of outrage - the legendary John Waters is returning to Australia to unleash his rapid-fire, one man show of wit and scandal.  Stories of his childhood, early influences and Catholicism, to fashion lunacy, sexual deviancy, and how to become famous.

“Waters doesn't kowtow to the received wisdom, he flips it the bird… he has the ability to show humanity at its most ridiculous and make that funny rather than repellent.”The Washington Post

Hysterical, shameless and revelatory
With his pencil-thin moustache, Hollywood smile and trademark flamboyant suit, John Waters has forged an unwavering path in his quest to give bad taste a good name.

Known for his early subversive work such as Pink Flamingos (1972), as well as box office hit Hairspray (1988), the eccentric filmmaker has pioneered transgressive movies.

In his new show 'Make Trouble' Waters serves up salty reflections on the world today, his camp obsessions and life lessons including the downsides to fame (none), all studded with cameos from the larger-than-life stars he has worked with — from Divine and Mink Stole to Johnny Depp, Kathleen Turner and Patricia Hearst.

The raconteur has been touring to adoring crowds around the world for nearly 15 years — though his outrageous insights are as sharp as ever. His return to Australia in October coincides with the release of his ninth book Mr. Know-It-All, The Tarnished Wisdom of a Filth Elder.

“It is a show that I’m constantly updating.
I try to make it filthier and dirtier.”    John Waters

Sign up for updates and news on upcoming events: